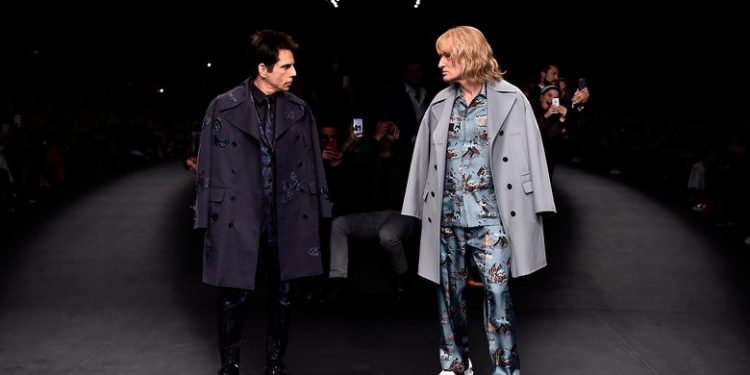 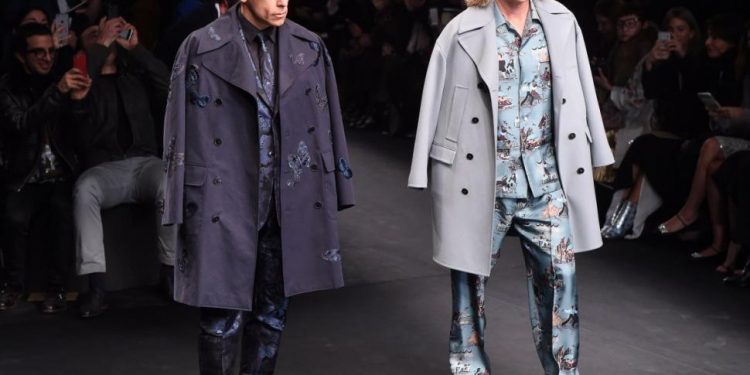 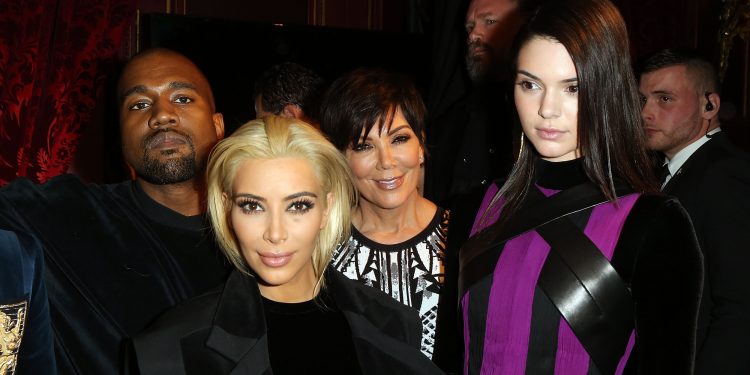 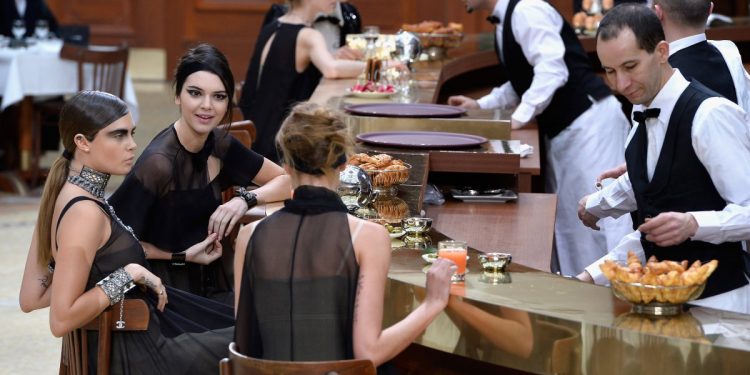 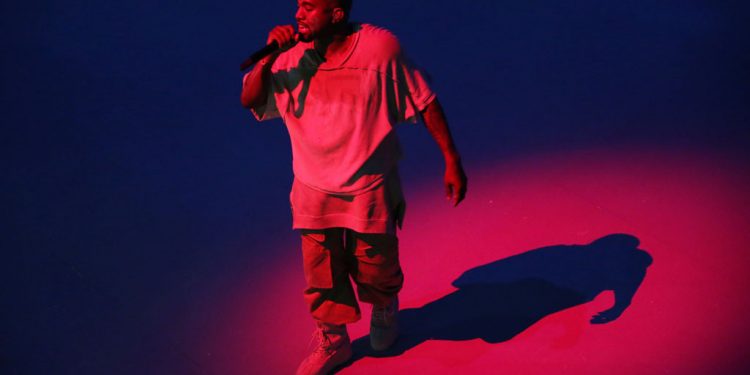 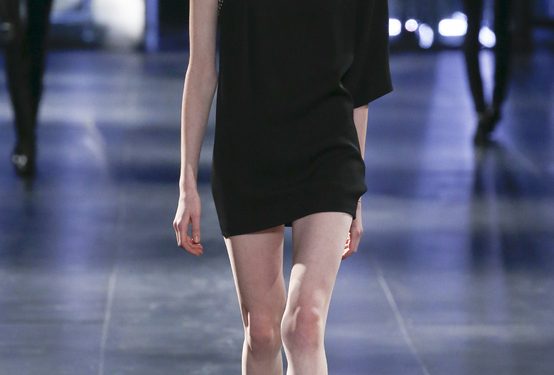 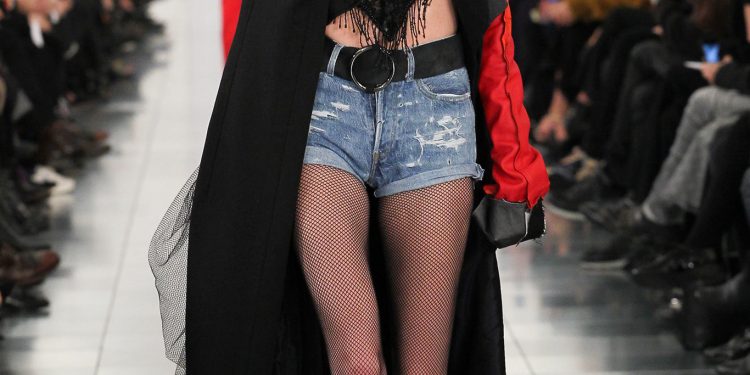 Derek Zoolander took a selfie with Hansel and American Vogue editor-in-chief Anna Wintour today.
They were together back stage before the VALENTINO Women’s Fall/Winter 2015-16 fashion show in Paris. Blue Steel and Le Tigre also walked the VALENTINO runway. This spectacle represents a flawless Suburbanist infinity loop. This alignment of multiple corporately driven Suburbanist interests is a 21st century operating manual of bland transparency. Starting with Paramount Pictures then adding Conde Nast and finally VALENTINO owned by Mayhoola for Investments, a Qatari financial group, you have a propaganda matrix. They structured a strategically organized digital event.
A spectacle created to be captured by an iPhone using Instagram, owned by Facebook, the scripted reality was a programmed message presented with great importance but with absolutely no meaning.
Between the room the runway and the data presented you have a conceptual construction we refer to as The Soft-Carpeted World. This is the control center of the fashion-industrial-complex, FASHIONWORLD. 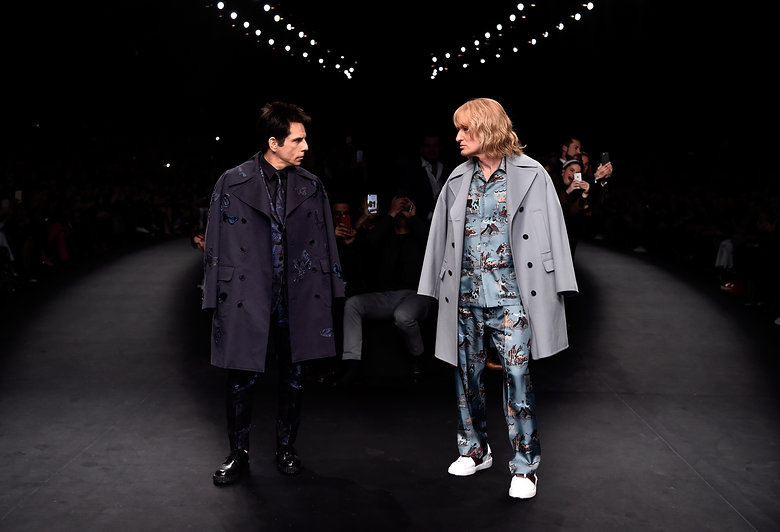 Blue Steel [Ben Stiller], Le Tigre [Owen Wilson], Anna [Anna Wintour] are the leads. The VALENTINO design duo Maria Grazia Chiuri and Pierpaolo Piccoli in this scene play the extras. The characters played the scene with the awkwardness of adults knowing they are props . They understand that they have been reduced to numerical data. Apple, Facebook and GOOGLE are in control here.
They will remain in control of the global cultural data in the near and distant future. 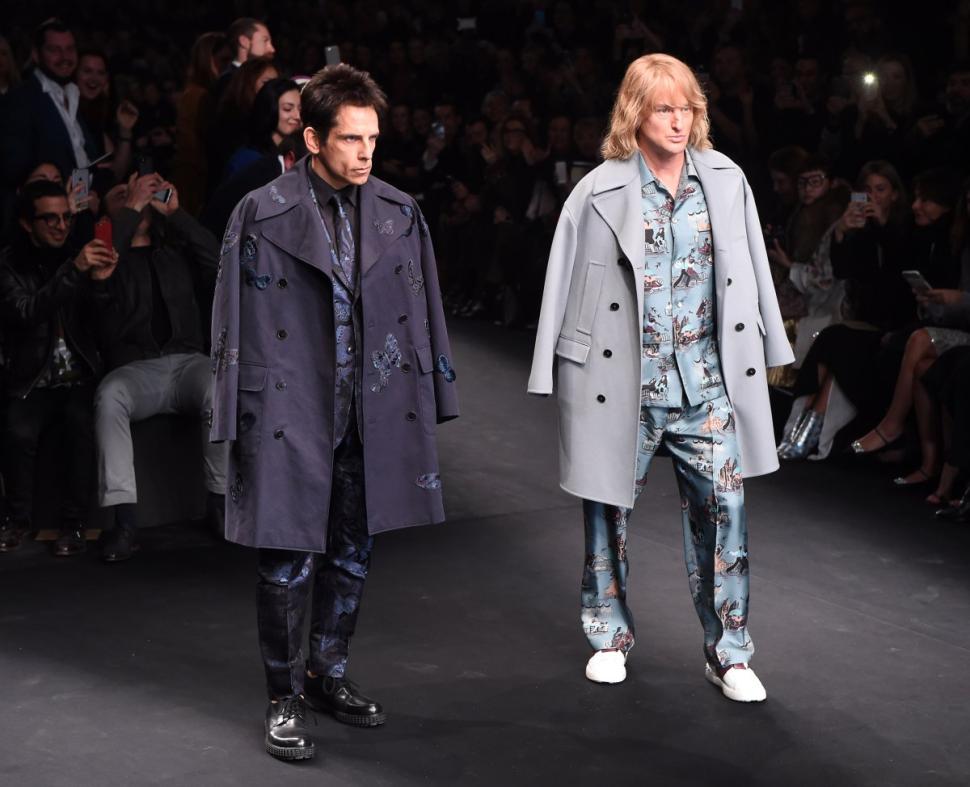 The Hollywood conglomerates, the luxury brand corporations and the mass media groups, Conde Nast in this scenario, have very quickly, faster than they ever expected, lost control of the cultural creation agenda.
The Northern California Suburbanist corporations have taken full control of the production, distribution, and status building hierarchies that constitute our consumerist driven global culture.

Paris Fashion Week was invaded and overrun by the current dominant American Suburbanist operatives.
These include Kris Kardashian Jenner, Kim Kardashian, Kendall Jenner, Kanye West, Gigi Hadid, Karlie Kloss, Jared Leto, and Terry Richardson. They were assisted in the assault on Paris by the British agents which this season like every recent season comprises Katie Grand, Jefferson Hack, Stella Tennant, Eddie Cambell, Cara Delevingne, Alexa Chung and the newest UK representative of Suburbanist imagery Lotte Moss. We have to also mention the Paris operatives that have been called upon season after season to create a fantasy of faux insider cool including Olivier Zahm, Andre Saraiva, Camille-Bidault Waddington, Thomas Lenthal, Jennifer Eymere, and Sarah Andelman. During the course of PFW there was one effervescent appearance of genuine style, grace and charm with the attendance in the front row of Jane Birkin. 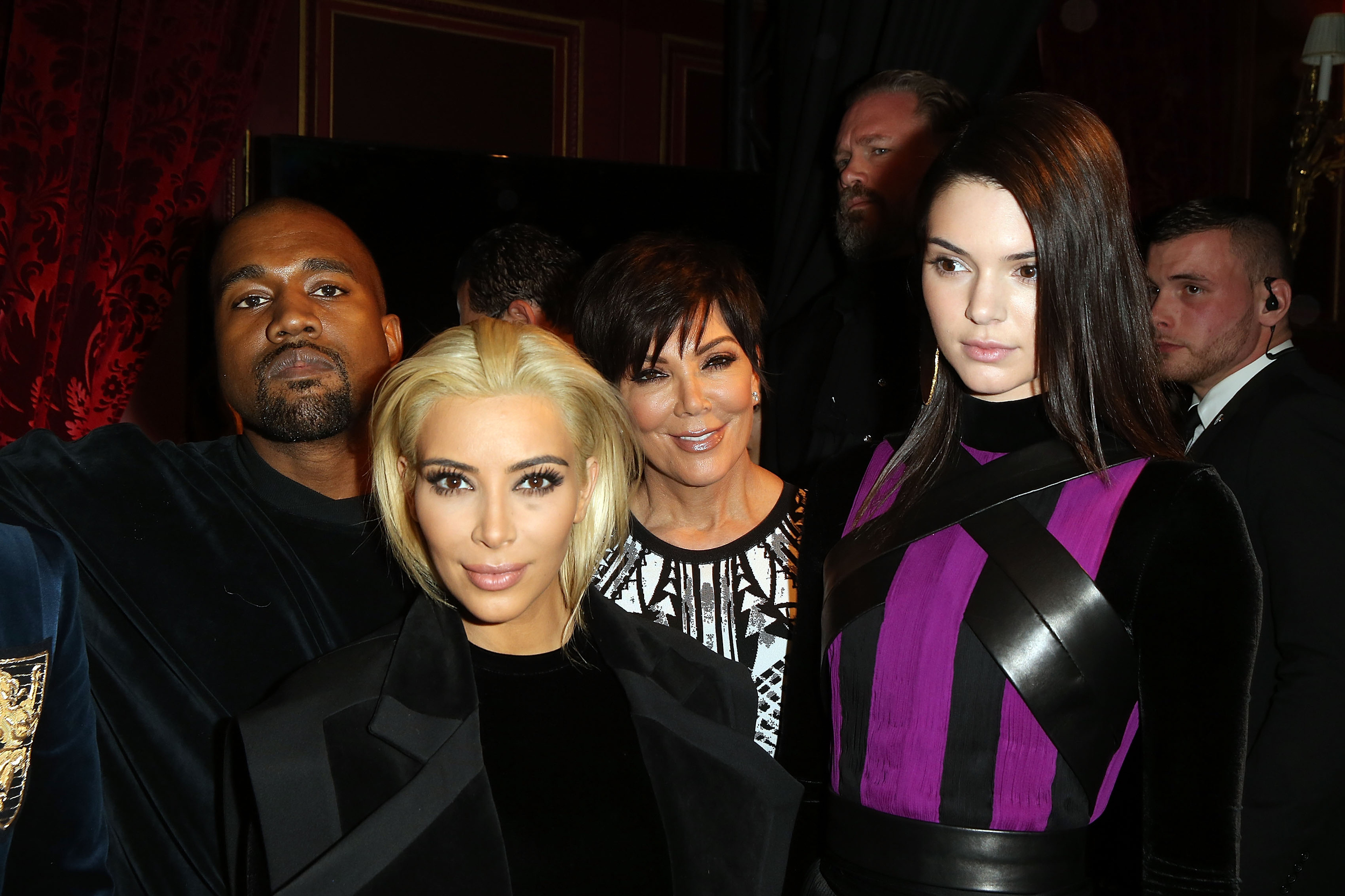 The designers, the models, the bloggers, the muses, the journalists, and the photographers are relegated to playing secondary characters or extras. Most who attend these planned spectacles are used as decor. FASHIONWORLD owners and their executives increasingly are as in any soap opera playing once vital but now aging leading roles.

The seasonal game of who is designing what collection is weakening as a distraction strategy. The front row has replaced the runway as where the action and major scenes are now played out. Visibility has moved past creativity.

Kanye West’s series of four concerts presented at the FONDATION LOUIS VUITTON was an algorithm created to place and then push data through the Suburbanist network of identity surveillance. Comparing the data statistics on the runways by SAINT LAURENT, DIOR, MARGIELA, GIVENCHY, CELINE, and CHANEL is what is now of utmost importance by the FASHIONWORLD wonks. Accounting has superseded the issue of being original. 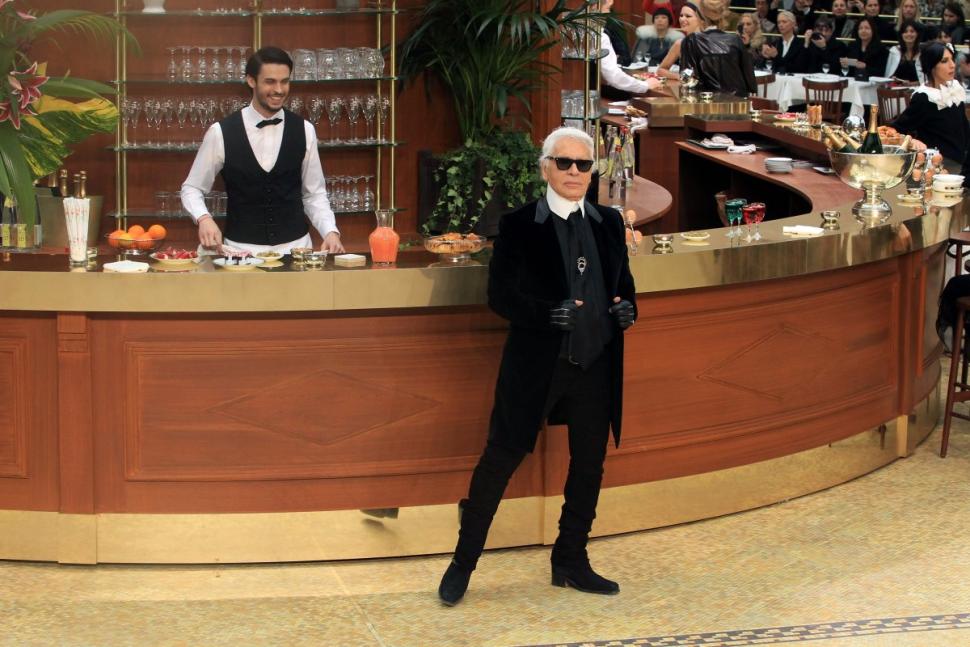 They only memorable statement uttered during PFW was not made by Hedi Slimane, John Galliano, Raf Simons, J.W. Anderson, Nicole Phelps, Tim Blanks or Suzy Menkes. The Suburbanist operating system has transformed them all into writers of digital code. Invisible to most and irrelevant to the rest. 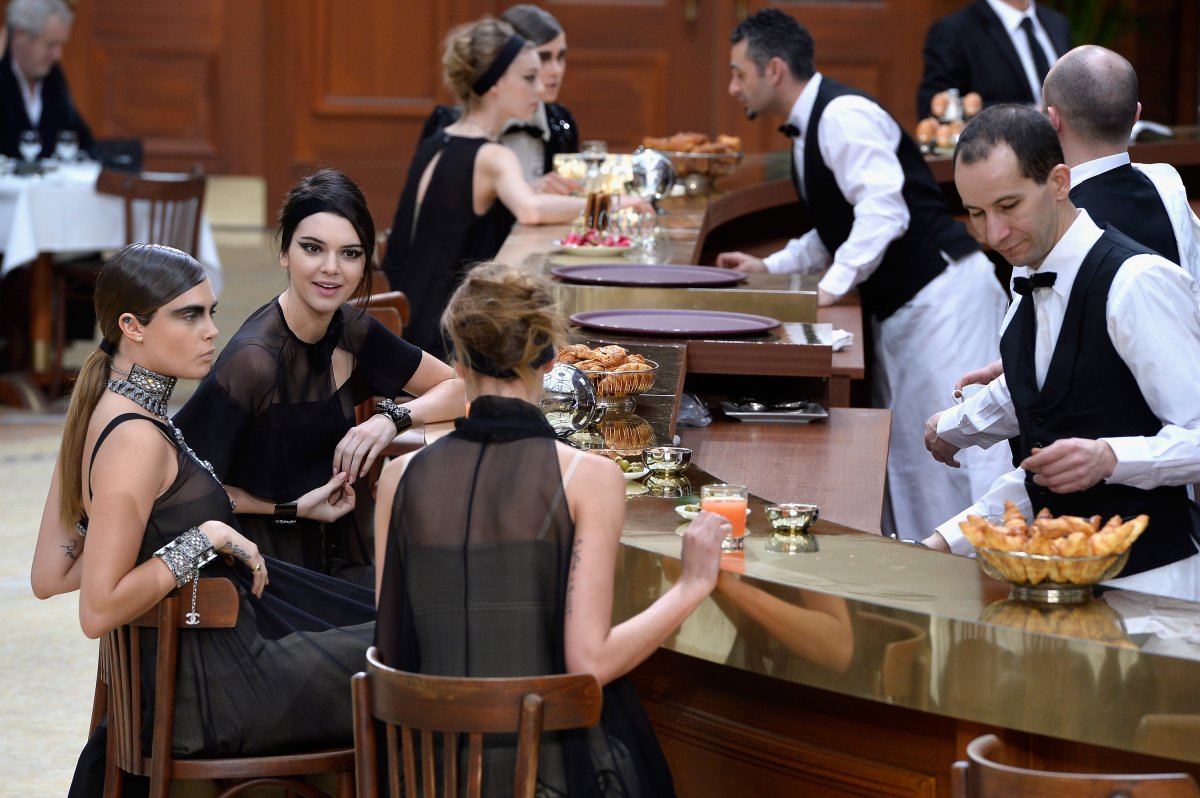 The lead player during PFW was LVMH CEO Bernard Arnault. When asked for his reaction to Kanye West’s performance held within his new global propaganda production facility he said ‘He’s great,” while giving a Terry Richardson style thumbs-up signal. Even the appearance and manipulation of Instagram co-founder and CEO Kevin Systrom by the PURPLE INSTITUTE organization could not top Mr. Arnault’s iconic line reading. 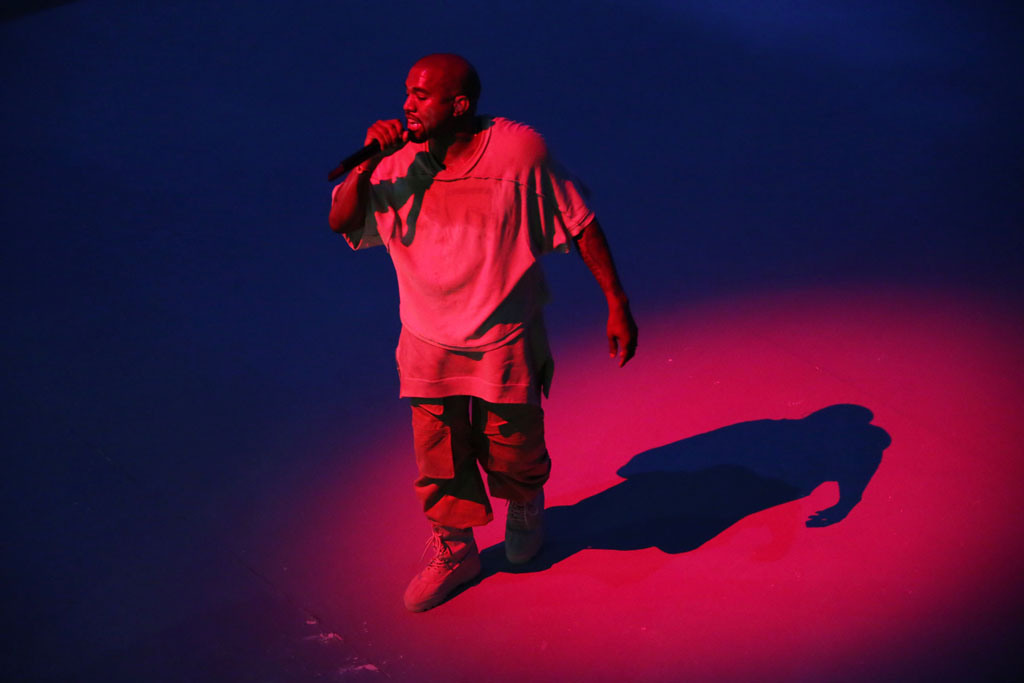 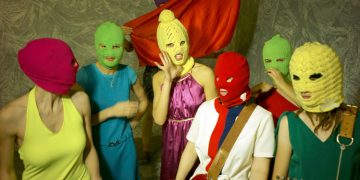